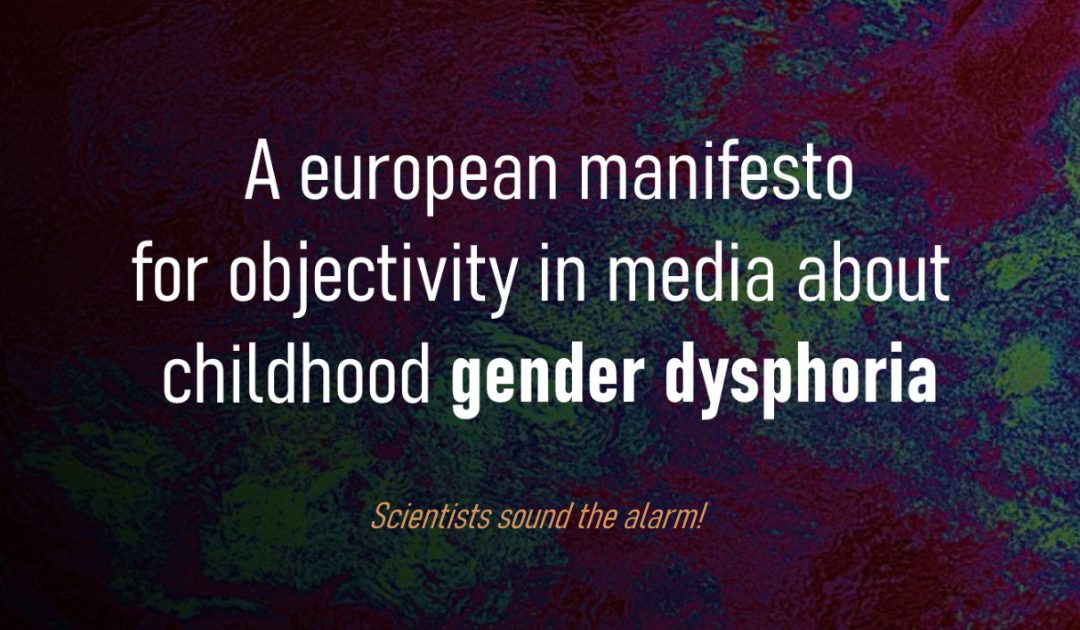 140 scientists from eight countries are calling on the media to end one-sided and unscientific reporting on transgenderism. In their “European Manifesto” they demand that “diversity of views” be shown and critical voices be heard.

Presentation of the European Manifesto

The Franco-Belgian team of childhood professionals (doctors, psychologists, teachers, academics) of the Observatoire “La Petite Sirène” has taken the initiative to publish in the media of several European countries a Manifesto aimed at warning the public at large of a need for impartial information both in the media and in the public institutions about gender dysphoria among teenagers.

By creating the Observatoire and through publishing ‘La fabrique de l’enfant-transgenre‘ (Caroline Eliacheff, Céline Masson, L’observatoire, 2022) and ‘Dysphorie de genre‘ (Jean-Pierre Lebrun, Charles Melman, Eres, 2022), l’Observatoire de “La Petite Sirène” has been warning for a year and a half against a drift leading to an overly rapid medical response which can lead to irreversible body alterations, in particular among teenagers showing, for some of them, psychopathological problems which should be dealt with through a non-affirmative approach.

This Manifesto can be signed by all the European citizens who call for the same caution, while respecting the rights of transgender persons.

We, scientists, doctors and academics of the humanities and social sciences, call upon the public service and private media of France, Belgium, Germany, the United Kingdom, Switzerland and other European countries to faithfully represent serious studies and scientifically established data concerning “gender dysphoria” of children in programs intended for a large audience. Regarding sex education in schools and educational platforms, we call for the respect of the fact that children and adolescents are involved in a dynamic developmental process.

Currently, too many programs and reports univocally convey the unfounded claims of trans-affirmative activists, often without any objective assessment. Children and teenagers are displayed on TV together with their parents in order to support the unsubstantiated claim as to the benefits of sexual reassignment. This is completely unsupported by any scientific data, for there is none that could support such false claims.

We are witnessing the promulgation of a new vocabulary thas been created specifically to serve the function of clothing opinion with spurious scientific credibility. This is causing considerable confusion to young people.

Those scientists who would be likely to have a more critical perspective are given no voice or, worse, are repudiated without any right of response.

These unchallenged repetitive pressures from television programs and other media normalize and trivialize the ideology that claims that one could choose one’s gender at any age, in the name of “self-determination”, if one does not feel in agreement with the so-called “sex assigned at birth”. They could have an indoctrination effect on young people, constantly amplified through social networks

Gender reassignment is often presented as a miracle solution to the problems of adolescence. This has resulted in an increased number of young people who self-identify as “trans”, – the number of requests has increased twenty-fivefold in less than ten years. At the same time, under the guise of tolerance, a “sexual education” is being developed in schools from primary school onwards, which in no way takes into account the psychological immaturity of children, exposing them to intrusive and confusing content that serves this ideological agenda.

This overlooks the fact that these young people are about to enter a process of medical/surgical intervention that is rarely properly discussed, in order that its true implications can be evaded or hidden behind soothing language.

The number of young people detransitioning continues to grow

Scientific rationality and objectivity are absent from these presentations. Medicalised “solutions” to these young people’s problems are growing rapidly whilst the number of young people detransitioning continues to grow. They have been seriously physically damaged by their ‘transition’, and they testify to the superficiality with which they have been treated by doctors, psychiatrists and other health professionals.

As scientists, childcare professionals and academics, we strongly disagree with the assertion that women and men are merely social constructs or perceived identities.

We do not choose our sex. One is born a girl or a boy. One’s sex is established at birth and registered and each person constructs an identity that is never fixed and that evolves over time, something which is too often ignored. One can change the appearance of one’s body but never its chromosomal basis.

We call on the directors of television and radio stations, as well as the written press, and other media to represent not only the diversity of points of view, but also real knowledge concerning gender dysphoria in children and young people. Professionals who support a model of psychological care that takes into account the psychic temporality of suffering children and adolescents must not be excluded or absent from the debate.

In the common interest of all, and particularly of the youngest, we also ask public institutions to ensure impartiality in the presentation and transmission of knowledge on such an important subject.

In the common interest, and especially in the interest of the youngest, we also ask the public institutions to be wary of the need for impartiality when discussing and conveying knowledge regarding such an important issue.