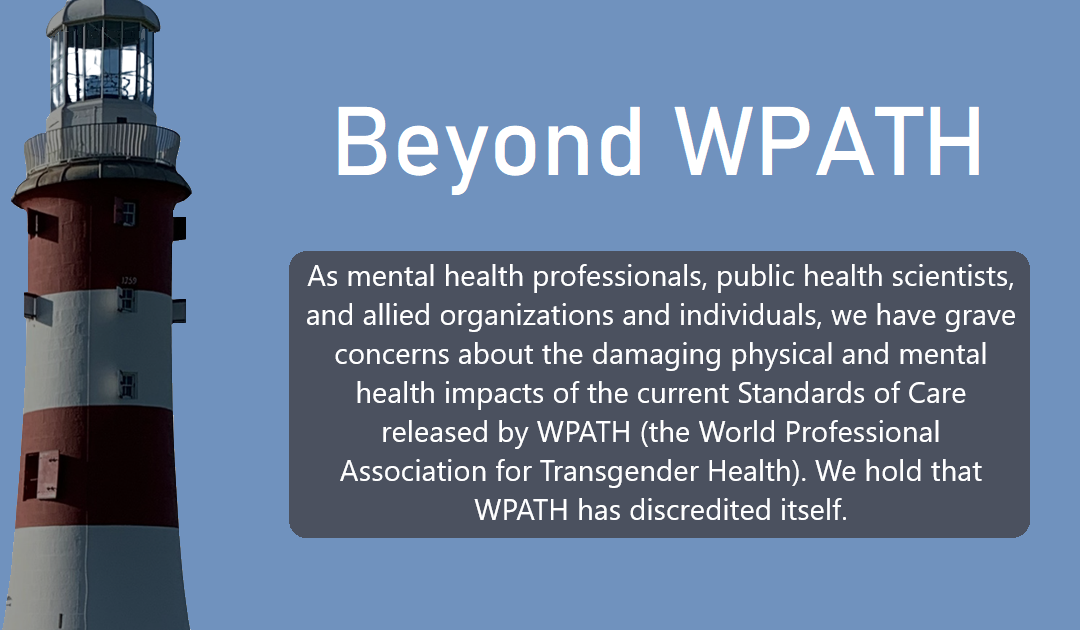 As mental health professionals, public health scientists, and allied organizations and individuals, we have grave concerns about the damaging physical and mental health impacts of the current Standards of Care released by WPATH (the World Professional Association for Transgender Health). We hold that WPATH has discredited itself.

WPATH HAS DISCREDITED ITSELF

With the recent release of its Standards of Care, 8th Edition, the World Professional Association for Transgender Health (WPATH) has undermined its standing as the preeminent authority on health care for gender-questioning youth. WPATH’s neglect of safeguarding issues for children, its adherence to ideological views unsupported by evidence, its exclusion of ethical concerns, and its mischaracterization of basic science all make its Standards a fundamentally unreliable guide.

Specifically, we hold that the authoritative status of WPATH’s Standards of Care is fatally undermined by the following errors and ethical failures:

For these and other reasons, we believe WPATH can no longer be viewed as a trustworthy source of clinical guidance in this field. Despite its claim to be a “World Professional Association,” WPATH and its Standards are actually outliers on the international stage, and deaf to the alarms being sounded within the scientific community concerning the use of experimental treatments on children.

The organizations, physicians, research scientists, mental health professionals, and other signatories to this Statement stand together in supporting alternatives to WPATH’s deeply flawed Standards of Care. We align with the most up-to-date science-based guidelines from those countries which have already evaluated and rejected the affirmative approach. We believe health care professionals serving the needs of gender-questioning youth can honor and respect their rights without subscribing to a flawed ideological document marred by ethical failures and factual errors.

In response to dramatically rising numbers of gender-questioning youth, a wide range of alternative guidance has become available, embodying professional expertise that is ethical, minimizes the risk of iatrogenic harm, and respects the limitations of our current scientific evidence base. We are signing this Declaration to highlight our grave concerns about WPATH’s Standards of Care, and to encourage parents, schools, psychotherapists, and other health care professionals to utilise the wealth of alternative resources that can be found online and in printed materials that are now widely available.