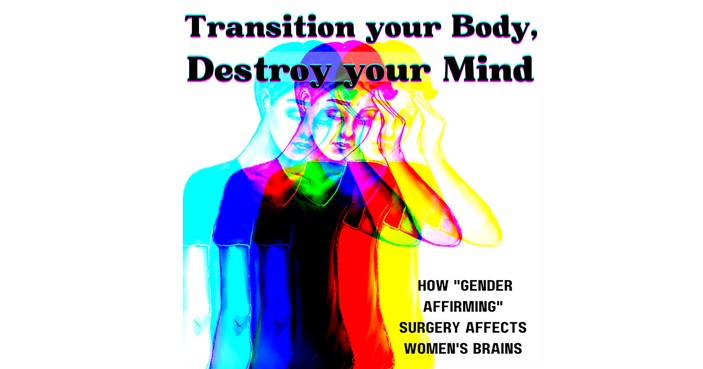 Transition your body, Destroy your mind

“Gender affirming care” is a profitable and growing area of medicine (USD 131.4 million in 2019) but because of the patients’ often undiagnosed mental health co-morbidities, gender ideology’s domination of society and culture, and the dubious ethics of the treatments, much is still either unknown or obfuscated. There is a diverse body of information about the benefits and detriments of these treatments but little has been said of the studies which show that induced menopause, inevitable after the surgical removal of the estrogen-producing ovaries (oophorectomy) can lead to young-onset dementia, a devastating condition for the sufferer and a huge burden on society.

It’s doubtful that when a girl or woman first gets the idea that she’d like to become man, she’s thinking about the long term effects on her health. She more likely has the “gender goals” presented in the WPATH Standards of Care masculinization package:

The medical interventions (”gender affirming care”) needed to achieve these effects require taking exogenous testosterone in amounts which are dangerous to the female body. (For an interesting examination of the effects, this ‘trans’-directed website is worth checking: https://www.gires.org.uk/should-trans-men-have-a-hysterectomy/). Although she may not have begun her “transition” thinking she’d like to be rid her ovaries, at some point in her metamorphosis the “female to male transitioner” (FtM) will probably have an oophorectomy. Some oophorectomies are for elective or preventative reasons including: to stop gender-invalidating menstruation and unpleasant Pap tests, to lower the need for a dangerous dosage of testosterone, to eliminate the risk of ovarian, uterine and cervical cancer, and to eliminate the possibility of pregnancy.

Whatever the reason, an oophorectomy is not a walk in the park; there are real consequences to removing the estrogen producing female gonads, like an increased risk of cardiovascular events and all-cause mortality. This message is often deliberately obscured for the FtM community, though.

Although there may be different side effects after ovary removal in females taking testosterone vs those who are not, all will go through induced menopause. The changes that happen in the female body after natural menopause (average age 51) are known: osteoporosis, increased risk of cardiovascular disease, memory loss and other joys of aging. What happens when menopause is induced in a comparatively young woman? After an oophorectomy, hormones levels drop sharply within 24 hours. These women report more severe symptoms than experienced by women who’ve had natural menopause, including depression and anxiety. Alarmingly, many studies have also shown “significant linear trends of increasing risk” that the younger the woman is when menopause is induced, the greater her chances of developing cognitive and motor impairment.

According to this 2019 study from researchers at the Universities of Toronto and Northern British Columbia :

“… significant cognitive decline is seen when comparing cognition before and after surgery in younger women with induced menopause, particularly in the areas of verbal memory and global cognition. Risk of cognitive impairment is increased for women who undergo induced menopause before age 49 compared with referent women, with risk increasing with younger age at surgery. The earlier the age of induced menopause, the steeper the cognitive decline, particularly in episodic and semantic memory. As well, higher levels of Alzheimer’s disease (AD) biomarkers are associated with younger age at surgery. Women undergoing menopause before age 40, regardless of type (induced or POI), have poorer verbal and visual memory compared with women with spontaneous menopause.”

A recent study from Shandong University confirms that menopause before age 40 brings a 35% greater chance of dementia. The implications for the FtM community, who often get menopause-inducing surgeries at a young age (23.9±13.8 years in this 2018 study of 159,736 hysterectomies performed on FtMs between 2013-2016) are serious.

A study from 2012 which compared 2 cohort studies showed that the more gynecologic surgeries women had, the greater the risk of cognitive impairment, and they hypothesized the cause as estrogen deficiency. In fact, from the Danish study: “Hysterectomy with unilateral oophorectomy increased the risk by 110%, and hysterectomy with bilateral oophorectomy increased the risk by 133%”. Even without the other complications, cognitive impairment should be enough to give a person second thoughts. Studies show that women can be treated with estrogen to counter the negative effects of an oophorectomy; however this is probably not an option for women trying to pass as men and planning to continue testosterone for the rest of their lives. So, what happens to the relatively young women who are facing rapid cognitive decline?

When dementia afflicts those younger that 65, it’s called young onset dementia. Harder for doctors to catch, it can be mistaken for depression or other conditions, and diagnosis is often delayed. Young onset dementia sufferers lose so much. They might have a young family of dependents they can no longer provide for when they stop working or driving. They have poor overall health. There might be financial responsibilities that can’t be met, like a mortgage or college fund. They may need assistance to perform the basic necessities of life, such as eating, grooming, and understanding their surroundings. 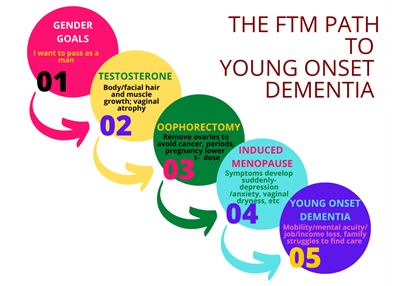 They will be especially isolated since the vast majority of dementia patients are seniors, and may need places in care homes with special dementia wards. This disease also progresses faster in the younger population. This 2019 study shows that life expectancy is “reduced 51% for males and 59% for females compared to the life expectancy of the general population in the same age groups.” The implications of this on society could be severe.

In Canada in 1994, the financial cost of young-onset dementia was $389 million. The most basic math to reflect the amount of inflation puts that number at about $750 million today. It might well be much more. Individuals and their families will be affected in many ways. Where will the young onset dementia sufferer get assisted daily living? What will happen to any minor dependents that need care? Where will research money come from?

It is unlikely that any female in 1994 was having “gender affirming” ovary removal. Now we know that the number of these surgeries has increased exponentially. Are more women and girls going to see oophorectomy as a natural addition to a radical mastectomy? Are more doctors going to be offering these surgeries and subsequent treatments as a taxpayer-funded lifestyle choice? How many young onset dementia sufferers will there be among women who’ve tried to become men? Who is going to take care of them, and their dependents? Some FtMs will have children from before “transition”, have partners with children, will put off “gender affirming” medical interventions until after having children or will freeze their eggs. In fact, many fertility businesses have begun to welcome “trans” clients, but without any warning of young onset dementia, naturally.

What no one is telling these females is that negating their sex means negating their health, longevity, mental acuity, and possibly their independence at a young age. The people who are affirming today exploit these women and girls for profit and blatant self-interest. Is it supposed to be a mercy that young onset dementia will leave these women unable to rage at their loss?

The original can be found at GenderDissent – Transition your body, Destroy your mind