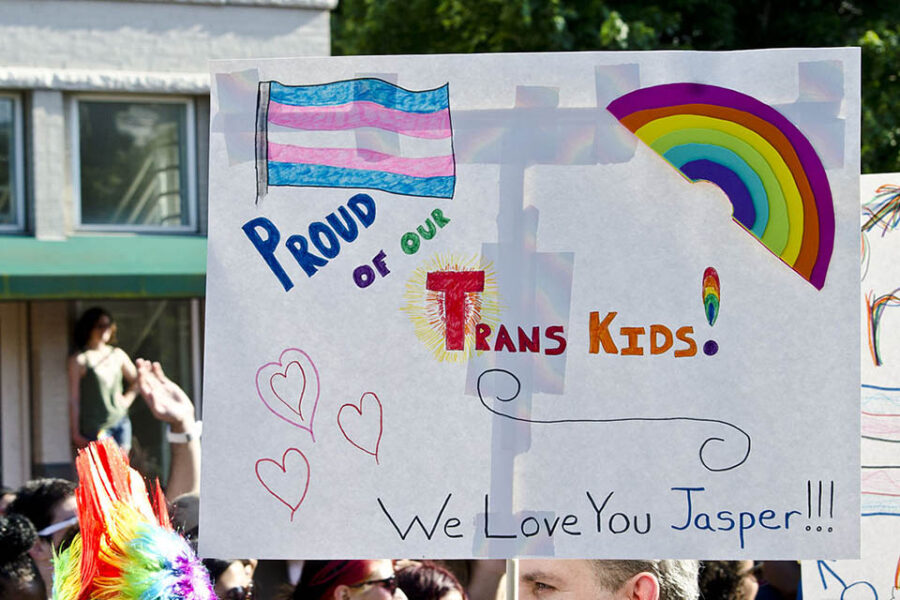 Why is this phenomenon being pushed so hard?

Transsexuals get a lot of positive attention these days. A young girl who suddenly, out of the blue, expresses doubts about her gender is immediately encouraged by adults to take further steps. Also in Flanders. Legislative proposals to aggravate this phenomenon are under development. The number of young girls who want to become transsexual in Flanders has been growing in recent years. A trend that is somewhat behind the Anglo-Saxon world. There, however, numerous lives have already been destroyed and the group of ex-transsexuals is growing with deep regret.

Irreversible damage
What occurs is the girls undergo radical surgery very quickly: chest binders, puberty blockers, hormones, double mastectomies, penis constructions. All with their own specific problems, such as broken ribs, destroyed breast and arm tissue, unrecognisable nipples, lowered voice, becoming physically uncomfortable for intimate contacts, infertility and all sorts of additional complications. Most of these problems are permanent. Including the lowered voice. The latter occurs after only a few weeks of hormone treatment. But even the best surgery cannot change the nature of biology.

Lies of transactivists
Journalist Abigail Shrier describes the transactivist community as a cult. Once you’re in, a simple ‘like’ to the wrong person can lead to far-reaching discussions. There are also various pieces of advice circulating that are of questionable quality. For example, that all trans operations are reversible. Or that transsexuals who regret it afterwards were never really transsexuals (and therefore not worth discussing). Or that you can lie to your parents without any problem (or completely break off contact if they are being too reluctant to agree). In short, nothing should stop your transevolution. Not even your own doubt.

Also in Flanders?
Is this just as terrible in Flanders? The Transgender Infopunt officially advises our care network (via CAW, Centrum Algemeen Welzijnswerk) and says: ‘WPATH explicitly speaks out against all medical requirements for legal recognition of gender identity (e.g. diagnosis by a doctor or psychologist, hormone therapy, sterilisation), which for many trans people still form a barrier to legal gender reassignment’. Clicking through, we learn that this commandment also applies to minors. They even oppose any cautious ‘wait and watch’ period. Whoever wants an official sex change, for whatever reason, should be given his way immediately (what if he changes his mind?). And what about medical sex change? A contact told me about a girl with lesbian thoughts who was immediately pushed by a psychiatrist to become trans.

How to protect youth from wokeness
Unfortunately, one must assume that many official institutions such as universities, schools and the health sector, increasingly subscribe to the woke ideology. So gently prepare your children for all kinds of propaganda. It is best not to try to control their minds, but to give them good arguments and teach them how to think critically.

Woke expands further
Does society not have to be very careful with such non-curative medical interventions with far-reaching consequences? Transactivists portray every brake as offensive, dangerous and reprehensible. They push some young people ever deeper into a sick world of lies and abuse. Sex and gender remain only a hyperindividualistic expression of identity, to the detriment of its biological and social function, which is to create the next generation.

Woke is a phenomenon that is nestling itself deeper and deeper in our society, tirelessly. Including adults who advise adolescents with temporary identity problems to undergo sex operations. Even against the explicit advice of their parents. It is difficult to estimate how badly the transgender epidemic among a large group of Anglo-Saxon girls has spread to our region. But one can no longer say that nothing is wrong. At the very least, the way in which the care sector and politicians are reacting to this is disturbing.

Read the full article on DOORBRAAK.BE

Home » Transgender: the new trend among young girls
Share This